I was called by a Social Worker who asked me if I could go on a house call to an elderly woman to talk to her about the advantages of living in an assisted living community.

There was attention and concern for her because she was showing signs of forgetfulness and some personal neglect.  There were also signs of financial abuse from a family member.

I met with them at her apartment. We discussed what she likes to do for enjoyment, socialization, etc.  We discussed her former career. Reminiscing about this brought about such a GREAT smile on her face! She really loves helping people.

I introduced the idea of assisted living as a change of lifestyle to include the things we were just talking about; socialization, events, music, outings to museums, helping others, etc.

She lit up like a light bulb, she was so eager to go take a look that we got right in the car and went to a nearby assisted living community right then for lunch.

We enjoyed lunch and talks about all the people she helped in her career. 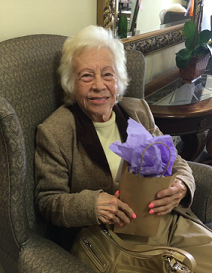 She is 91 and she was a social worker herself for over 40 years helping women and children, she has such pleasant memories of all of those that she helped. I really wanted to show her that same kindness and respect that she gave to others.

Then she asked, “How much is it to live here?’ I told her and she couldn’t believe it!  Her next question was, “Can I afford it?” and the answer was, YES!”

She moved in the next week and began living again a simple but social life and it was truly a pleasure for her, she felt so blessed to be afforded such a great place to live and great people to be around.